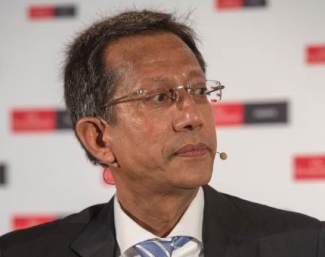 Azzim Gulamhussen was a speaker at The Lisbon Summit 2018, at March 14th, where he participated in the panel “Fintech: Adapting to the Digital Future”.

Azzim Gulamhussen, member of the Portuguese Diaspora Council and lecturer at Vlerick Business School, in Belgium, participated as a speaker in The Lisbon Summit 2018, a conference organized by The Economist Events.

The Portuguese Counselor questioned the Lisbon Summit’s audience when debating the relationship between the traditional banks and fintech: “Are the elephants going to smash the ants or are they going to overcome the elephants?” Azzim Gulamhussen explaines his question: “The banking sector has always been well protected for decades, but the clients not (…) Now people understand that”. “The banks are going to continue to exist, but few”, he continued the explanation, concluding that “the banks are afraid and they should be: not everyone will survive”.

Azzim Gulamhussen was part of the panel “Fintech: Adapting to the Digital Future”, included in the second day of the conference, where it was discussed the adaptation of the banking sector to the digital world. This panel also had the participation of Irene Mia, Global Editorial Director at The Economist Intelligence Unit, Maria Benjumea, founder and CEO of Spain Startup – South Summit, Nuno Fernandes, Dean of Católica Lisbon School of Business and Economics, Bruno Ferreira, partner at PLMJ and Matteo Rizzi, founder FinTechStage.

The event, that took place in Hotel Miragem, in Cascais, in March 13th and 14th, had as central theme “Disruption and Growth” and debating themes themes such as the opportunities and the strategies to a sustainable growth of the country, the economic recovery, the political stability and the impact of the technological revolution, in area such as macroeconomy, education, finances, health, politics and business.