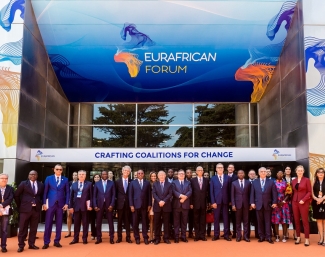 The Portuguese Diaspora Council launched the 1st Edition of the EurAfrican Forum in Cascais, on July 10 2018, gathering together European and African leaders, with the theme “Crafting Coalitions for Change”.

The meeting, that took place at Estoril Congress Center, with the High Patronage of the President of the Portuguese Republic and the Portuguese Government, was led by José Manuel Durão Barroso (Chairman of the EurAfrican Forum) and Filipe de Botton (President of the Board of the Portuguese Diaspora Council). The participants were business leaders, influencers, entrepreneurs, politicians, ambassadors and representatives of the new generations, that gathered together in Cascais to explore the potential of the two geographic blocs, with a sustainable development and an improvement of the quality of life of the people.

The 1st edition of the EurAfrican Forum focused around three main panels:

– “Trust: How can we build trust among ourselves and inspire young people, develop their entrepreneurial skills and harness the potential of future generations?” The contributors were Christian Kamayou, CEO of MyAfricanStartUp (France/Cameroon); Sophia Bekele, Founder & CEO of CBS International and DotConnectAfrica Group (Ethiopia); Ziad Oueslati, Director and Co-Founder of AfricInvest (Tunisia). The moderator was Gameela Ismail, politician and activist (Egypt).

– “The Role of the Diaspora: What role can the diaspora play in rebalancing and advancing the Euro-African space?”. The contributors were Minna Salami, Founder of feminist blog Msafropolitan (Nigeria/United Kingdom); Pauline Mujawamariya Koelbl, Director of African Innovation Foundation; Tonjé Bakang, Chief Brand Officer of Anzisha Prize & Founder of Afrostream (France/Cameroon). The moderation was made by Sammy Berrahmoun, journalist of Canal Plus Group.

The EurAfrican Forum 2018 was also the stage of parallel events and moments of partnership. On July 9, the Portuguese Diaspora Council signed at Estoril Congress Center an institutional protocol with Lusa, the Portuguese news agency, with the aim of fostering a bigger contact between the Portuguese people living abroad. On the same day, it also took place a media exclusive panel for the media with the theme #coalitionsforchange with the participation of 4 bloggers and social influencers, members of the African diaspora. This panel focused the debate around the empowerment of the Euro-African womne and the role of the social media to craft coalitions for change. Still on the same day, it took place a Cocktail Welcome Drink at Hotel Palácio Estoril, an exclusive event for speakers, VIP guests and partners, and that counted with the participation of the Minister of the Economy of Portugal, Manuel Caldeira Cabral, and the presence of some African Ministers.

The 2nd edition of the EurAfrican Forum is scheduled for 2019.

By The Portuguese Diaspora Council, July 2018