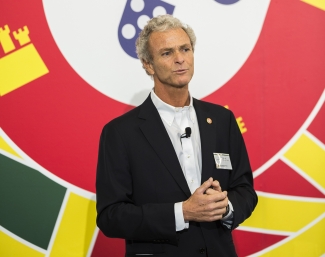 The President of the Portuguese Diaspora Council,anticipates the opportunities for a joint action between Portugal and the African countries that will be discussed at Estoril, on the EurAfrican Forum 2018.

Filipe de Botton shares with Jornal Económico that this “is not only a forum of intentions, but also of concrete action”, revealing that it is going to be signed during the event a partnership between a Portuguese and a Nigerian company.

At a time when climate change, demographic challenges and the technologic revolution are central pieces of the Africa’s and Europe sustainable development puzzle, it is crucial to understand what are the potentialities of the collaboration mechanisms between the two continents, to create synergies. This is the logics that led the Portuguese Diaspora Council, to organize the first EurAfrican Forum, that will take place on Tuesday, at Estoril Congress Center.

The President of the Portuguese Diaspora Council, Filipe de Botton, explains to Jornal Económico that this “is not only a forum of intentions, but also of concrete action” and it is way the selection of the speakers was on entrepreneurs, activists and businessman of a “younger generation”.

The EurAfrican Forum, that the organization expects to become an annual event, wants to become “a platform that gives voice to the aspirations and projects of a new leaders generation, allowing that contact and the relationship with the Europeans”. This edition counts with the participation of the executive director of DotConnectAfrica, Sophia Bekele, of the CEO of the Shoreline Group, Kola Karim, do CEO da Mota-Engil África, Manuel Mota, among others.

“We wanted to raise awareness to who makes concrete actions on the field. We want to look at the future and not at the past”, says Filipe de Botton. It is why the speakers aren’t politicians, with the exception of the speech of the President of the Portuguese Republic, Marcelo Rebelo de Sousa, and of an institutional panel, moderated by the Minister of the Foreign Affairs of Portugal, Augusto Santos Silva, and that will count with the participation of representatives of many countries, among them the Minister of the External Relations of Angola, Manuel Augusto.

“We are very pleased, after the tension that happened, to see that a member of the Angolan government will be present to an official visit to Portugal to participate on this meeting”, highlights the President of the Portuguese Diaspora Council, adding that “the great mission of the Council is to create value to the country and an initiative like this, a platform between Portugal and Africa, that isn’t limited to the Lusophony, will be an excellent way of promoting Portugal”.

Filipe de Botton anticipates a participation of about 50% African representatives and 50% Europeans, between the 387 expected attendees. “We expect to create a strong contact network that will lead to the development of coalitions” states, revealing that it will be signed during the event a partnership between a Portuguese and a Nigerian company.