Shooting in Portugal is a growing business 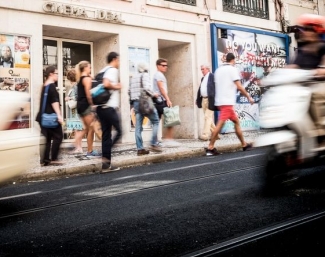 The 14 approved projects, on the scope of the tax benefits of shooting raising in Portugal, are predicting a total investment of  23,7 million euros on the country, said an official source of the Ministry of Culture.

“Until now – and including the requests made in 2017, with the previous tax regime – it was approved benefits for 14 projects, including productions from the USA, India, Brazil, Portugal or Italy, and many co-productions of Portugal and France, or Portugal, Spain and France”, corresponding to “a total investment of 23,7 million euros, in shootings in Portugal”.

The numbers are put forward on the Cinema World Day and around one month after the publication of Fundo de Apoio ao Turismo, Cinema e Audiovisual’s regulation on Diário da República, that  frames the concession of these benefits.

According to the document published on September 28, the Portuguese literature adaptation, the shooting in Portuguese places and studios, the existence of awarded film directors and the participation of women on the projects, are requirements that are valued on the applications to this fund.

Created by the Government, and in force since June, the Fundo de Apoio ao Turismo, Cinema e Audiovisual has a capital of 30 million euros and a overall allocation that could allow its extension to 50 millions, until 2022, “according to its impact execution and evaluation”.

The application to the fund implies a minimum investment of 500 thousand euros on the national territory, in case of movies shot in Portugal, and of 250 thousand euros, in case of work related with production. According to the regulation, the maximum amount to the support for each production is 4 million euros, and “are uniquely admitted the projects that will have an international distribution”.

The Portuguese government considers this fund “one of the most competitive in Europe”, allowing a reimbursement “until 30% of the expenses in projects of higher economic impact and/or cultural” and establishing “a maximum period of 20 workdays for the appreciation of the requests”.

The fund concessions is made through the joint decision of  Instituto do Cinema e do Audiovisual (ICA) and Turismo de Portugal. The Fundo de Apoio ao Turismo, Cinema e Audiovisual has a consultive council presided by Turismo de Portugal, with representations of ICA, the Ministry of Finances and one personality choosen by the government.

The previous system, in force in 2017, predicted essentially, a deduction of 20 to 25% of the  elegible costs, made in Portugal, for the production of feature films.

The Portuguese Diaspora Council took for discussion the subject “Innovation on the Audiovisual and Media: an Opportunity for Portugal”  on the 3rd Annual Meeting, in December 2015 (review the Conclusions of the debate HERE), where the Portuguese Counselors Joana Vicente and Ricardo Pereira participated has speakers, and the film director Leonel Vieira, participated has moderator of the panel. After the meeting, it was defined has a priority on the strategy of the Council to develop this subject in Portugal, in articulation with Turismo de Portugal and Instituto do Cinema e Audiovisual.