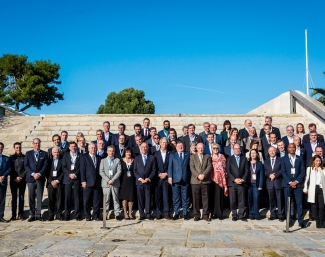 The Portuguese Diaspora Council gathered on the 6th Annual Meeting to discuss the Portuguese talent and competitiveness, on December 21, 2018, at Palácio da Cidadela, in Cascais.

Palácio da Cidadela was, once again, stage of debates that are considered to be challenges on the medium term to the development and strategic positioning of the country on an international context.

With the presence of Diaspora Counselors, entrepreneurs and Portuguese institutional leaders, the 2018 debate panels, moderated by Fernanda Freitas, were dedicated to the following themes:

– “How to enhance and project the Portuguese talent in Portugal?“. The speakers of this panel will be Eli Eisenberg (Technical and Vocational Education Training – TVET),  António Calçada de Sá (Diaspora Counselor and Executive Director at Repsol, Spain), Alberto Carvalho, (Diaspora Counselor and superintendent of Miami-Dade County Public Schools, USA).

Augusto Santos Silva asked for the development of the Portuguese Diaspora Council has “an important Portuguese diplomatic instrument”. “I don’s forget the importance that the Council had when, in 2012, it was created in the height of a crisis”, highlighted the minister. Last year, “one of the big achievements in international matters, in Lisbon, was the EurAfrican Forum”, said, adding that he looks to the next edition has a new “opportunity to value the relationship between our country and African continent and the role that Portugal has as a relationship pivot of the general relationship between Europe and Africa”.

On the previous day, December 20, the Portuguese Counselors were received with a Welcome Drink at Palacete de São Bento, an invitation of the Prime-Minister.

In previous years, the Annual Meeting of the Portuguese Diaspora Council launched debates such as Leadership and Diversity, Cibersecurity, Managing on the Digital Era, Cultural Diplomacy, Skills for the XXI century, the Development of the Audiovisual Industry in Portugal, Portugal as Nearshoring Go-To-Country, Disease Prevention and Health Promotion or Smart Mobility on a Green Economy.

“Portugal is going to be a center of talent capture"