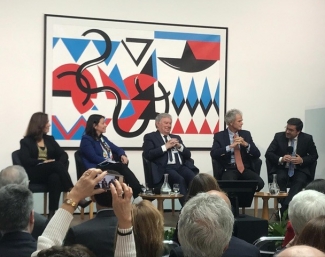 The Portuguese Diaspora Council took part of the “First Meeting of Portugal Network in Portugal”, represented by the President of the Board, Filipe de Botton, on April 22, at Museu das Artes de Sintra.

The President of the Board of the Portuguese Diaspora Council took part of the opening session of the PT Network event with the theme “European Policies and National Economy”, along with Basílio Horta, Mayor of Sintra, Sofia Colares Alves, Head of the European Commission Representation in Portugal, Fernanda Ferreira Dias, Director General at Directorate General for Economic Activities and Henrique Burnay, President of Portugal Network.

The European Commissioner for Research, Science and Innovation, Carlos Moedas also joined the event, stating that the Portuguese companies are “really good” and are among the best in Europe, suggesting the investment on the project planning, meeting the principle that innovation is reachable on the “interception between the dream and the detail”.

“What I see here is the best in the world, so you don’t need to have complexes in what concerns the Portuguese innovation. The best examples come from Portugal and we must have that capacity of fighting, especially being proud”, highlighted the European commissioner.

The “First Meeting of Portugal Network in Portugal” debated the transformation that innovation, digitalization and reindustrialization is generating on the economy, the answer that the European Union is giving to these challenges, and how do the Portuguese companies should prepare for the change in European policies, regulamentation and European funding.

Besides the institutional support of the Portuguese Diaspora Council, the event was also supported by the Secretary of State of the European Affairs, of the Directorate General of the Economic Activities, of AICEP and the Representation of the European Commission in Portugal, as well as the sponsorship of the Eupportunity – European Affairs Consultancy.

Foreign service centers are already worth 55 thousand jobs in Portugal

Portuguese people influencing around the world