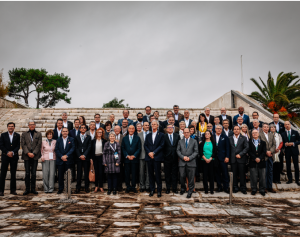 The Portuguese Diaspora Council gathered at its seventh annual meeting to discuss a new production and consumption system, on December 20, 2019, at the Cidadela Palace in Cascais.

In 2019 the Annual Meeting debate is focused on the challenges facing the transition to an environmentally sustainable digital economy and a new low-waste, high-performance production and consumption system that respects the limits of environmental resources, and at the same time ensures the aspirations for progress and comfort that Western societies have gained in recent decades.

The meeting also had a moment dedicated to smart cities, with an interview with the Mayor of Cascais, Carlos Carreiras, by journalist Cristina Esteves.

“Our vocation is to be a platform between cultures, civilizations, continents and oceans (…) and because we are this platform, we are increasingly important”, recalled Marcelo Rebelo de Sousa.

Augusto Santos Silva said that “one of the least known realities of the country is the contribution of the diaspora to the economic growth of Portugal.”

Filipe de Botton, President of the Board of the Portuguese Diaspora Council, reflected on the Council’s role for the country, saying that the organization “has managed to put Diaspora on the agenda of the day throughout its eight years of activity”.

In addition to half of Portugal’s worldwide network of Counselors, the event was attended by recognized and influential leaders from the business sector, academics, culture, public decision-makers and non-governmental organizations, which contributed to the enrichment of the discussion.

The day before, the Portuguese Counselors were received by the Minister of Foreign Affairs at the Palácio das Necessidades.

By Council of the Portuguese Diaspora, January 2019

"We often say that we are the best ambassadors of Portugal"