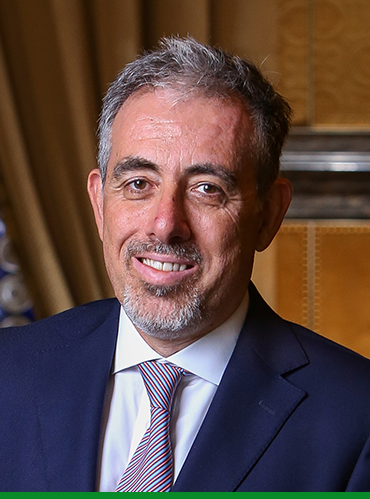 Antonio Menano is the Senior Vice-President for the Legal and Administrative Issues and General-Secretary of MGM China Holdings Ltd. a company that holds the casino hotels MGM Macau and MGM Cotai, that had its opening in 2017.

He joined the MGM group in 2005 as Director for the Legal and Administrative Issues and General-Secretary of MGM Grand Paradise S. A., one of the six concessions of gambling in the Special Administrative Region of Macau, having accompanied the development of the group activities since the beginning operations in Macau, and also the opening and closing processes of the first and second properties and for OPV in the Hong Kong exchange, HKEX 2282.

Previously, António Menano was the Director of International Relations, Legal Area and Aerial Transport Authority of the Civil Aviation of Macau for more than 10 years, having been the responsible for the negotiations of aerial accords for the Special Administrative Region of Macau, and for the preparation of the juridical framework of the civil aviation industry on this Region.

He also worked as delegate of the Air Macau Company Limited Government and at Macau’s Institute of Social Action.

In Portugal he developed, together with Maria do Carmo Pereira and José António Uva’s family, the São Lourenço do Barrocal project, in Monsaraz.

He is graduated in Law for the University of Coimbra.