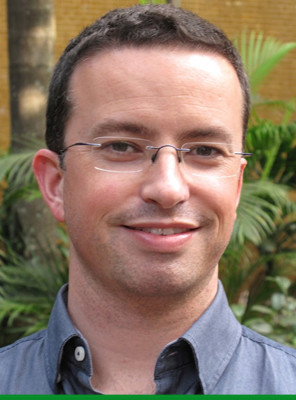 Tiago Fleming Outeiro graduated in Biochemistry for the University of Porto, and was an Erasmus student in the University of Leeds, in the United Kingdom. Tiago Outeiro developed his doctoral thesis in the Whitehead Institute for Biomedical Research, MIT, nos EUA, where he developed the first model in yeast for the Parkinson disease. After that he worked as a researcher and Consultor in a biotechnology company that helped to create – FoldRx Pharmaceuticals – also in the USA.

After that he made his post-Doc in the Department of Neurology in the General Hospital of Massachusetts, Harvard Medical School, where he focused his studies in neurodegenerative diseases, such as Parkinson and Alzheimer.

He directed the Celular and Molecular Neuroscience Unity in the Institute of Molecular Medicin (IMM), and today he is Full Professor and Director of the Department of Neurodegeneration, in University Medical Center Goettingen, Germany.