Universidade Católica Portuguesa (UCP) and Amyris, led by the counselor John Melo, renewed the agreement that established in 2016 the “European Bioproduct Research Institute” at the Biotechnology School of UCP.

The project, named ‘Alchemy’, will bring a 43 million investment to Porto in investigation and development (I&D). The Portuguese prime-minister, António Costa, was present on the signature of the agreement at Silicon Valley, where he was received by the counselor the the Portuguese Diaspora, John Melo.

About this project, Manuela Pintado, scientific coordinator of the project and director of Centro de Biotecnologia e Química Fina da Católica, explained the economic and environment gains of the project. “On its fermentation projects, Amyris produces, at their Brazil’s factory, tons of waste to which should be given new value”, to produce new molecules with biological methods, more environment friendly and secure.

During the first stage of the project that will last five years, the focus is the “creation of high value of I&D” that will end in the “development of prototypes from these natural molecules to then commercialize them”, revealed the scientist.

AMYRIS, based in San Francisco on the USA, is the leader company on the development of innovative solutions of the application in biotechnology in many industrial sectors, since cosmetics and fragrances, to pharmaceutical products, the food sector, fuels and lubricants, among others. 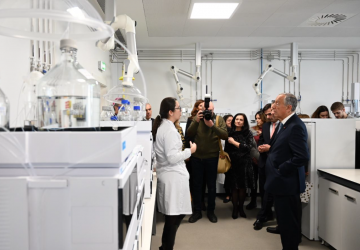