– Is Portuguese food the next big trend? 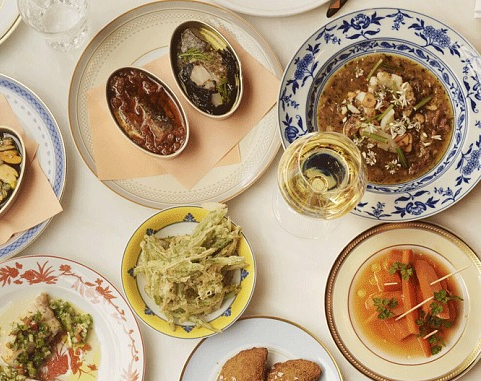 Nuno Mendes latest venture is a Portuguese restaurant, but he is not the only chef to be inspired by Europe most westerly country.

When Nuno Mendes opens a new restaurant, you can be sure it will make waves – this is the same chef who brought us celebrity mecca the Chiltern Firehouse, after all. And for his latest venture, Taberna do Mercado in London’s Old Spitalfields Market, he has decided to celebrate the cuisine and wines of his native Portugal. “I am at a point in my career where I wish to pay tribute to my country and my early life memories,” Mendes explains. The small plates for sharing include cenouras de escabeche (preserved carrots), port caramel and Casa da Prisca DOP cheese. Even the marble tabletops are sourced from the Estremoz region.

Taberna do Mercado’s arrival stokes an already growing interest in Portuguese produce. Around 2.1 million British visitors now head to Portugal every year, with numbers up 15 per cent in 2014.

The 2015 food trends that are worth your attention

“We’ve noticed a growing curiosity in Portuguese cuisine and culture as result of Portugal becoming a popular travel destination,” says Rita Maia, co-founder and director of The Portuguese Conspiracy. This East London collective runs Portuguese supperclubs and cultural events, as well as an e-commerce store selling everything from Alentejo olive oil to flavoured salts from the Algarve’s marshes and, of course, lots of sardines.

Tinned seafood is hugely popular in Portugal – at Taberna do Mercado the team will also be tinning their own in-house. It was a trip to Lisbon cafe Sol e Pesca, where brightly coloured tins of fish cover the walls, that inspired architect Amanda Levete to create a pop-up dedicated to tinned seafood delicacies at London Design Festival 2014. Influenced by 20 years of visiting the Algarve, Bristol food blogging sister act A Recipe for Gluttony are kicking off a series of supper club events with a four-course Portuguese feast, while The Little Portuguese Kitchen supper club in Newcastle serves up authentic dishes such as Feijoada – a rich pork stew traditionally throwing in all sorts of piggy parts plus black pudding, veg and kidney beans.

In turn, there’s an influx of Portuguese foodies bringing their recipes and flavours to the UK: Portugal is now among the five biggest foreign working communities in Britain, according to the Office for National Statistics in Lisbon. In addition to Nuno Mendes, the chef camp consists of his protégée Antonio Galapito, who will be manning the kitchens day-to-day at Taberna do Mercado; Leandro Carreira, former head chef at Viajante who is taking up a two-week residency at Carousel in June; and Luis Baena of Notting Hill Kitchen. Edinburgh’s Casa Amiga bakery and cafe was opened last year by a Portuguese couple that fell in love with the city while on holiday, and in Cambridge it’s a similar story for Adilia Fraza, who has brought Portuguese breads and pastries to Norfolk Street Bakery. It seems the Anglo-Portuguese Alliance (the oldest in the world, dating back to 1373) is as strong as ever.

So what are the typical dishes you’d expect to see on a Portuguese-inspired menu? Bacalhau (salted cod) is one of the most iconic – perhaps served ‘Bras style’, shredded and sautéed with onion, potato and egg – along with caldo verde (a soup of potato and kale) and Alheira de Caça (a sausage stuffed with garlic, bread, and game meat). Then there are deli treats such as São Jorge, a strong cow’s milk cheese from the Azores, and acorn-fed Barrancos cured ham from the Montado region of Alentejo. “People are often surprised with the singularity of our food, with strong, rich but at same time simple flavours, where the ‘raw’ materials play the main role,” Rita Maia explains.

Amazing bars to drink at before you die

As for those with a sweet tooth, pastéis de nata are ubiquitous in Portugal, and these little custard tarts now popping up alongside brownies and cakes in many a British bakery and café – including Blue Legume in Islington, Fork Deli Patisserie in Bloomsbury and on stalls in Borough Market or Bristol’s St Nicholas’s Market. At Lisboa Patisserie in west London, which claims to be the longest-running Portuguese pastelaria in London, they often sell out by 2pm.

There’s also a rapidly growing interest in Portuguese wine, which experienced double-digit growth in the UK in 2014. While Britons have been big drinkers of Port for over a century, wines from Douro and Alentejo, sweet, fortified moscatels, and vinho verde (a young ‘green’ sparkling wine from Minho) are all attracting well-deserved attention.

“Portuguese wine is on a roll,” confirms Tom Harrow, founder of WineChap and director of Honest Grapes. “It’s hard to beat for value and excitement, with a long history of winemaking and some fascinating soils allied to a new breed of dynamic young winemakers.” He names Wine & Soul and Vale Meão in the Douro, Casa de Mouraz and António Madeira in Dão, and Filipa Pato in Bairrada as ones to watch.

It looks like there’s never been a better time to eat and drink all that our long-standing ally has to offer.