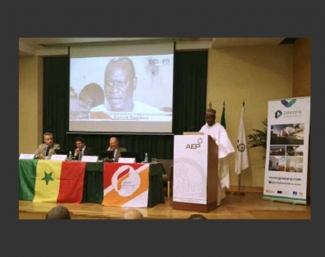 The 2018 edition, that took place in Leça da Palmeira, had has main topics the Economic Development _ Infrastructures and Industry &  Territorial Management and Descentralized – Casamance Agrobusiness Pole.

The main economic meeting between both continents in Portugal, registered the biggest international delegation until the moment, as well as, an increasing presence of entrepreneurs and Portuguese entities that joined the initiative.

This edition, had the high patronage of Paviana Construções and Paviana África, and had has main aim to raise awareness in Portugal about the historic agreement signed on September 10, in Ziguinchor, Senegal, between CCIPS/AO and CNDT in what concerns to the constitution of the Casamance Agroindustrial Cluster, a unique project the places Portugal on a strategic position on the economic relations of both continents.

According to the president of the Juridic Commission of CCIPS/AO – Senegal Delegation, M. Chrystian Faye “the bridges that Câmara de Comércio e Indústria Portugal – Senegal and its Permanent Delegation in Dakar are building today, will be the future base for the trade and entrepreneurial relations between both continents”.

Joana Rocha Scaff, one of the most influential women on Private Equity

Shooting in Portugal is a growing business