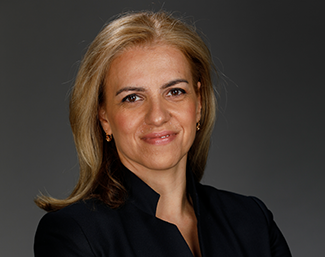 A meritocracy defender, Ana Tavares, Portuguese Diaspora Counselor, is the Canon Finance financier in the USA. But she says she also seeks to make the most of Portugal from her place in the Diaspora.

Ana Tavares had a happy childhood, marked by the four months she spent at the family home in Sagres (Algarve). Beach days alternated with the school year at  Externato Marista in Lisbon. “I was the quiet one sitting in the corner,” he tells us. Intropectively, as a child he liked to read Enid Blyton. Later, as a teenager, Julio Verne, Marion Zimmer Bradley and Isaac Asimov. His favorite shows were science fiction by Carl Sagan and Jacques Cousteau. That’s why she dreamed of being a speleologist or marine biologist. With a degree in Accounting and Financial Management from ISCAL, she joined Pannell Kerr and BDO in Lisbon, Bristol Myers-Squibb in England and the USA and Pall Corporation in the USA. In her area of ​​expertise, Shared Services, she has led reorganization projects in Asia, Europe and the Americas.

At 45, she works at a trademark in over 200 countries, with 197,000 employees worldwide. At Canon, for six years, he has held regional responsibilities for Treasury, Tax, Account Consolidation, Accounting and Shared Services and Financial Systems.

WHAT DOES ANA SAYS…

Does photography play an important role in your life?

Image and photography play a central role in society at large. The pace has accelerated dramatically. When Man went to the moon, precisely five photos were taken of Neil Armstrong, today a trillion photos are taken each year. Through this medium we can tell stories, communicate emotions. “A picture is worth a thousand words”. How about a challenge: do the 365 photo challenge?

What photos do you never fail to take?

Our inclination is to take pictures of fun times, unique places, certainly is my case. However, the photos we enjoy most have to do with the times of our lives, with daily rituals. I would love to have a picture of my apartment in England, but I don’t have one. Not always the photos I want to take are the ones I will give more value later.

At Canon how is Japanese culture notorious?

It is underlined in the idea that society and organizations are timeless, with the privilege and obligation to contribute to a better world. Especially through the idea that today’s work and actions should benefit future generations. If you’re curious about exploring further, Harvard Business Review has published a very interesting article: “The Path to Kyossei.”

And what has “Portuguese” imprinted on its management and living?

The Portuguese bring immense ingenuity, an enormous capacity to do much with little, a discovering, heuristic learning style. This skillset can be applied in a variety of situations: investment in digitization; development of shared services; resource savings in partnerships; understand the end consumer; understand and influence the regulatory context. The best of me is Portuguese: academic background, professional background, curiosity, and an accent to stay.

You have worked in Europe, Asia, Latin America and the U.S., what were the main learnings on how to work and the culture of each continent?

There is the corporate culture side and the influence of the home country culture. As a newcomer to England I was surprised by things like: the day starts early and usually ends early; work has fewer breaks during the day; respect for the arrival time; formality in meetings, being quite structured; informality in treatment among colleagues. In dealing, the use of the first name, and the same in the boss. The career progression is clear and definite. Despite these and other differences, the biggest lesson learned was that the Portuguese academic system provides well above average preparation.

In the US, energy is directed toward vigorous dedication to work ethic, and recharging batteries is divided between family and community causes. Unlike a social state – like Portugal – in the United States, social security and the legal status of employment contracts are almost irrelevant. Higher risk but greater flexibility. It is up to each individual to manage their retirement, more structured in private funds and less in social security. Employment contracts are rarely used. In most cases an employee is in a company at will, may leave at any time and may also be “dismissed” at any time. The willingness to take such risks, to sacrifice long vacations, to have a good academic preparation, experience in a particular area, consistent and dedicated performance, pays dividends after a few years.

I would say that it is the United States of America where I enjoyed working the most to date. I identify with the accentuated cult of meritocracy in the cause / consequence relationship. I also really enjoyed working in England and Singapore. For me, having worked in Europe, Asia, Latin America and the US, I stress the fascinating challenge of managing the cultural differences that exist in teams in different countries, beyond the language barrier, of course. On the other hand, working with Latin America has proved to be the biggest challenge, as its work culture is grounded in interpersonal relationships where favoritism and self-interest prevail, which requires time. That is, instead of diving headfirst into the work that has to be done, first step back or side to get to know the colleagues involved in the work.

What is your role as Portuguese Diaspora Council?

Manuela Ferro: “A leader must know how to listen; many good ideas don't come from us”