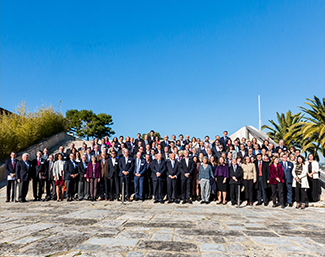 The 5th Annual Meeting of the Portuguese Diaspora Council took place on December 20th 2017, at Palácio da Cidadela in Cascais, with two debate themes: ‘Leadership and Diversity’ and ‘Cybersecurity’.

In the opening session, the Ministry of the Foreign Affairs argued that the Portuguese diaspora is “a case study” in Europe, because of the integration facility of the emigrants in their host countries without losing their connections with Portugal. “The Portuguese diaspora in Europe should be and it is already in many places a case study, because we don’t have any new about significative integration problems in the Portuguese communities in the European countries. There is no new about any problem caused by the unsuitability of Portuguese people, whether it is in Luxembourg, in the United Kingdom, en France, in Germany, in Switzerland”, said Augusto Santos Silva, in the opening of the 5th annual meeting of the Portuguese Diaspora Council, in Cascais.

In the Meeting’s agenda were big challenges that will take place in medium-term in the country as a global nation, in the context of its geopolitics and economic position and with practical results in the interests of the country. The debate themes of this edition were:

1) Leadership and Diversity. This panel approached the challenge of the female leadership, and in an extensive way the concept of ‘diversity of thought’ – gender diversity, sexual orientation, ethnicity, race and age, and had the participation of the counselors António Simões (in the panel preparation) and Rahool Panandiker; Graça Fonseca (Portuguese Government) and Maria João Ribeirinho (McKinsey). The study ‘Women Matter 2016’ by Mckinsey was presented.

2) Cybersecurity: Where are we? With the aim of continuing the international conference ‘Innovation Meets Cybersecurity: The Public-Private Cooperation Challenge’, that took place in November 8th, at Calouste Gulbenkian Foundation, this panel gave an extensive vision about this matter, including in the discussion the new European legislation and the challenges that the companies will face. The panel had the contribution and participation of António Moreira and Pedro Abreu (Councelors) and Manuel Lopes da Rocha (PLMJ).

The event’s presentation and moderation was made by Fernanda Freitas.

In the closing session, headed by the Honorary President of the Diaspora Council, addressing to the counselors and the association’s leaders, the Marcelo Rebelo de Sousa stated that “Portugal changed and it changed a lot” in the five years that has gone since 2012. “People have no notion. I hope that for the people wo are outside they can have that critical distance that people that are in the middle of the forest can’s see. It changed a lot, Portugal was able to make regime agreements even if only implicit”, he continued. “This in not only a lexical change, it is a mentality change, that is here to stay, whatever the government, whatever the solution – it is here to stay and it is a good thing that it keeps like this” he sustained. Watch the entire closing speech of the President of the Portuguese Republic HERE.

In previews editions, this Meeting presented themes considered strategic for the country, as the Exportation of Technological Services; the Disease Prevention and Health Promotion; the Artificial Intelligence and Management in the Digital Era; the Audiovisual and Media Ecosystem in Portugal; the Intelligence Mobility in Innovation; the competencies for the XXI century.