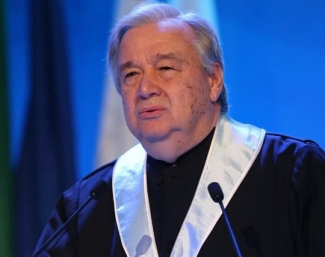 The United Nations Secretary General was distinguished with “Honoris Causa” title by the University of Lisbon.

The Secretary-General of the United States, António Guterres, was distinguished on Monday, 19th February, with the degree Doctor Honoris Causa for the University of Lisbon, under the proposal of the Technical Superior Institute, where he was a student and professor.

“I’ve always made what I could to fight for my values”. That’s how António Guterres defined his time during the national politics – and, now, in the United Nations.

The announcement of the attribution of this honorific title to the Portuguese former Prime-Minister was made in January by the Technical Superior Institute (IST) where the student António Guterres “had an exceptional academic path” and graduated in electrotechnical engineer in 1971.

Guterres was a Portuguese deputy for 17 years, since 1976, and was Prime-Minister of Portugal between 1996 and 2002. Later, in 2003, after leaving this position, he was a visiting lecturer in IST, before assuming for ten years, between 2005 and 2015, the position of High Commissary of the United States for the Refugees. Since the January 1st  2017, he is the Secretary-General of the United Nations.