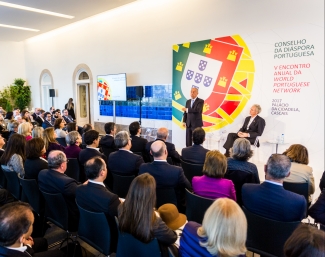 by Conselho da Diáspora
homepage, News about The Council and Counselors
0 Comments The Portuguese Diaspora Council will gather together on the 6th Annual Meeting to discuss the Portuguese talent and competitiveness, on December 21, at Palácio da Cidadela, in Cascais, between 8:30 am and 1:00 pm.

As in previous years, members of the diaspora and the Portuguese Diaspora Counselors will gather with influential leaders of the business sector, academia, culture, decision-makers and non-governmental organizations, with the presence of the Honorary Presence of the Diaspora Council, His Excellency the President of the Portuguese Republic, and the Honorary Vice-President, His Excellency the Minister of Foreign Affairs on the opening and closing sessions.

On the Meeting’s agenda will be presented two great challenges that, on the perspective of the Portuguese Diaspora Council, will be positioned on the medium term to the development and strategic positioning of the country on an international context.

The first panel will discuss the theme “How to enhance and project the Portuguese talent in Portugal?“, having on the base the study «Transforma Talento Portugal 2014», that analyzed and diagnosed the situation of the generation and talent under-utilization in Portugal, from where result 40 concrete action steps, and inside these the 13 selected and considered as priorities. It will be given an international perspective of what is being done on Vocational Education Training, as well as on companies on the talent capture and retention. The speakers of this panel will be Eli Eisenberg (Technical and Vocational Education Training – TVET),  António Calçada de Sá (Diaspora Counselor and Executive Director at Repsol, Spain), Alberto Carvalho, (Diaspora Counselor and superintendent of Miami-Dade County Public Schools, USA).

The second panel will concern about “Advantages of the context: how can Portugal strengthen its competitiveness?” presenting the position of the Portuguese case on the «Global Competitiveness Report 2017-2018» made by the World Economic Forum (42nd place among 137 analyzed countries, as well as a national perspective what is being done on the public administration reform, as well as the international perspective on private of the investor-entrepreneur and how do the companies select the countries to invest and how do they look to Portugal. The speakers of the second panel will be John Melo (Diaspora Counselor and CEO of Amyris Biotechnologies, EUA), Joana Rocha Scaff (Diaspora Counselor and Managing Director e Head of Europe Private Equity for Neuberger Berman, England), Manuela Ferro (Vice President of Operations Policy and Country Services at World Bank, USA) and Luís Castro Henriques (President of AICEP, Portugal).

Fernanda Freitas will be the presenter of the event, as well as moderator of both panels.

On the day before, December 20, the 2th Edition of the ‘Diaspora Talks’ will be the stage of informal interviews with the Diaspora Counselors, directed to a young and entrepreneur public, at LACS (Communitivity of Creators), in Lisbon.

In previous years, the Annual Meeting of the Portuguese Diaspora Council launched debates such as Leadership and Diversity, Cibersecurity, Managing on the Digital Era, Cultural Diplomacy, Skills for the XXI century, the Development of the Audiovisual Industry in Portugal, Portugal as Nearshoring Go-To-Country, Disease Prevention and Health Promotion or Smart Mobility on a Green Economy.

Watch the VIDEO of the Annual Meeting 2017.

Portuguese among the countries who consume more renewable energies

Joana Rocha Scaff, one of the most influential women on Private Equity