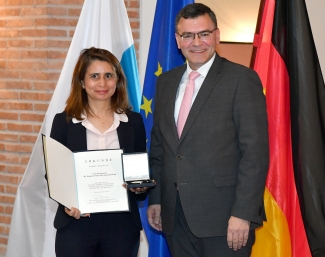 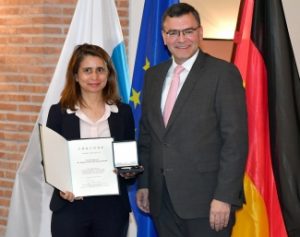 The Portuguese Diaspora Counselor and Professor at the Technical University of Munich (TUM),  was awarded the Bavarian European Medal from Bavaria’s European Minister Dr. Florian Herrmann for her “creativity, innovation and intellectual dynamism”.

Bavaria’s European Minister Dr. Florian Herrmann presented the Bavarian European Medal to Prof. Eugénia da Conceição-Heldt and twelve other distinguished personalities. Conceição-Heldt is Professor of European and Global Governance at the Technical University of Munich (TUM), Reform Rector of the Hochschule für Politik (HfP) and Dean of the TUM School of Governance. Since 1990, the “Medal for Special Services to the Free State of Bavaria in Europe and the World” has been awarded to people who have rendered outstanding services to the Free State of Bavaria in a united Europe or contributed to Bavaria’s international reputation in the world.

“If creativity, innovation and intellectual dynamism are our raw materials of the 21st century, your work at the Hochschule für Politik and the TUM School of Governance will be one of our greatest sources of future success,” said Minister of State Herrmann in praising Prof. Conceição-Heldt’s achievements. The political scientist thinks and works in a European and transatlantic network and ensures that science remains attractive and relevant in a digitalized world full of acceleration and new trends. Prof. Conceição Herdt’s research interests include European integration and the causes and consequences of the delegation of powers to international organizations.

She has held the Chair of European and Global Governance since 1 July 2016. On this date, she also took up her post as Reform Rector of the Hochschule für Politik. In 2014, the Bavarian Parliament transferred the sponsorship of the HfP to the TUM, which was completely restructured in the following years. Prof. Conceição-Heldt’s research and teaching at the HfP focuses on political changes in times of profound technological and social change.